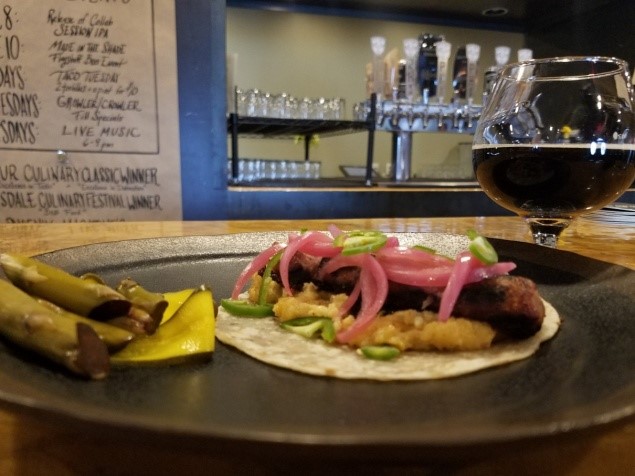 From Vacancy Blues to House of Brews

As far as some are concerned, it all started in the Northern California town of Sonoma in 1976. While Americans were gravitating toward lighter-flavored beers such as Lagers and drinking less of the robust styles from overseas, an industrious homebrew aficionado opened The New Albion Brewery; this was the genesis of the craft beer brewery.

Today there are more than 5,300 U.S. microbreweries fermenting everything from Ale to Zwickelbier. Arizona alone is home to more than 70 of these establishments which are helping to fill some of the commercial buildings in Phoenix that have long been left vacant. 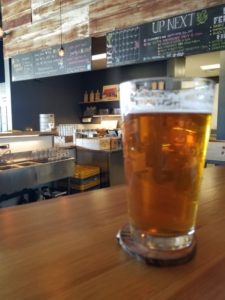 After Advanced Auto Service Tire Center closed its warehouse at 2144 E. Indian School Rd., Brian Helton renovated the space into 10,000 square feet of hop-and-barley goodness where great food is being served up complemented by craft beer. I recently stopped by for a drink and struggled to choose between their standard IPA, the Northeast IPA and the Rye IPA. I will be sure to try the savory Belgian waffle with pork, peppers, cheddar and sriracha on my next visit.

Sailing southeast from Helton will land you at 2125 N. 24th St., which is a 1940s single-family residence rezoned for commercial that was the home of Simply Bread bakery before Preston Thoeny, Drew Pool, and Bill Hammond opened the Wren House Brewing Company. Here I had choices such as the Hi Jolly honey wheat, Who Hit John imperial porter and the Night on the Sun Berliner Weisse sour. The black currants, grape skins, and berries in the latter made for a nice respite from my usual India Pale Ales and Imperial Stouts. 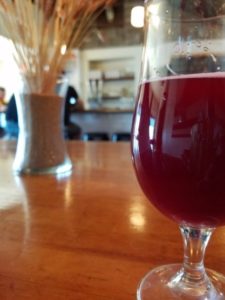 Night on the Sun

To complete the triangle, you have to disappear into Helio Basin at 3935 E. Thomas Rd. This site sat vacant for eight years after Clicks Billiards shut its doors. Mike Conley and brewmaster Dustin Hazer have created a space with some eclectic dishes and a good selection of beer styles including one of my favorites, an imperial coffee stout.

At 10 percent alcohol by volume, twice the amount in a standard beer, this chocolatey, caffeinated colossus is not to be taken lightly and is rightfully served in a smaller glass. After glancing over the menu, I couldn’t leave without trying the special of the day. I indulged in a taco whose handmade tortilla was stuffed with a Tender Belly sausage and mash potatoes along with bacon jam and candied jalapenos. Yum.

The folks sitting next to me were sharing one of Helio’s beer and ice cream paired flights which looked sensational; I will definitely be back. 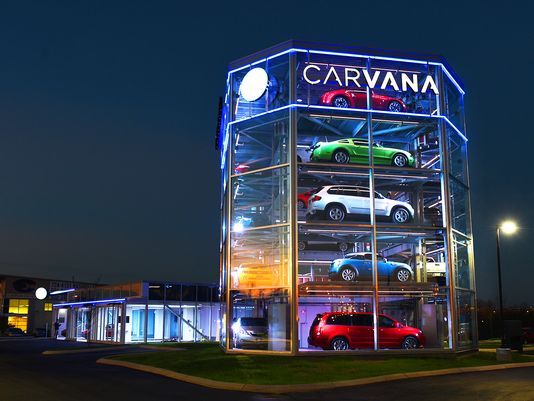 Vroom for growth: Arizona hits the road in the auto market

It’s not a mirage: Arizona is becoming a driving force nationally in numerous facets of the automotive industry, and the impact on our commercial real estate market could be significant for years to come.

Let’s face it. The auto industry in the U.S. has changed dramatically. Detroit, which once proudly wore the moniker of the “Motor City, is a shadow of its former self. Foreign automakers now dominate the market.

With ride sharing, self-driving cars, and electric cars all the rage globally, Arizona is in the fast lane. A Valley entrepreneur is even changing the way cars are sold. More on that later.

California-based Lucid Motors announced it will build a factory in Casa Grande, which will produce its 1,000-horsepower, Air EV luxury production electric car. The $700 million plant in Pinal County will sit on 500 acres of city-allocated land. It is estimated that more than 2,000 new jobs will be created. Lucid has Tesla squarely in its sights.

What will this do for the commercial real estate market in the Sun Corridor? It appears that there is an auto-based economy blooming in the desert. Attesa is a planned 2,300-acre motorsports facility with two racetracks, a hotel, and a private airstrip among its amenities. It is scheduled to be built in Casa Grande.

Even the City of Maricopa is getting on board. It will be the home of a proposed automobile “country club.” Apex Motorsports Club will sit on 280 acres and feature 200 car condos that will allow you to keep your favorite cars close to its four miles of private racetrack and 24,000 square feet of clubhouse and car-pampering space.

If all of these projects come on line, the Sun Corridor will surely see an explosion of auto components manufacturing, maintenance, entertainment, retail, and luxury residential rooftops. With the help of ex-Tesla engineer Peter Rawlinson and an injection of foreign capital, Lucid has the bits in place to become an automobile manufacturing leader in Arizona.

At Local Motors in Phoenix, its Rallyfighter was the car that defined the off-road sports car and was one of the first production vehicles brought to market via co-creation on the web. Powered by a General Motors-produced V8 engine, the Rallyfighter has a price tag of $100,000 and the owner can have a hand in building it at one of several micro factories.

It will gain renewed interest when it makes an appearance in the newest Fast and Furious franchise flick with “Letty” at the wheel. Local Motors recently announced the closure of its Chandler factory, but it will continue engineering and sales in Tempe of its newest venture, Ollie, a 3D printed autonomous minibus.

Ollie is being tested in Germany and appears successful enough to drive Local Motors to plan a ramp up of production.

The future of Phoenix-based Elio Motors, which has more than 64,000 reservations for its $7,300, three-wheel commuter car, is up in the air. At the end of 2016 it was reported that it had about $100,000 in the bank and more than a $123 million deficit. It is a great little car with sound engineering, but it will take more capital and a lot of luck before we see this cute conveyance in large numbers on the road.

Additional players in our auto “industry” are companies testing their autonomous driving vehicles. I’ve seen several new Volvo XC90s cruising around town with “lunar modules” on the roofs since Uber had its self-driving fleet booted from California. Google/Waymo has been here since last year and its test fleet is led by the Lexus RX450h hybrid. It appears that both companies are smitten by luxury SUVs.

Now let’s talk about Carvana. The Phoenix-based company has set its self apart by not only offering no-hassle car purchases and online financing but also delivering those cars to your doorstep. In some cities Carvana allows buyers to pick up their cars from a giant vending machine. I recently drove by one of these coin-operated, eight-story, glass structures in San Antonio. Carvana has put the fun back into car buying.

With a warm climate, large land parcels to develop, an emerging local tech force and proximity to California’s hot car market, Arizona looks to be an exceptional place to do all things auto.