PHOENIX, ARIZ. (March 3, 2021) – Behind every great organization are great leaders. The Arizona Self-Storage Association is no exception as it celebrates 25 years of promoting and strengthening the self-storage industry in Arizona.

Founded in 1996, the AZSA was created to present a unified voice on issues affecting the industry in the state and in its communities. AZSA continues that mission 25 years later with more than 400 storage operator and vendor members representing more than 600 self-storage businesses.

The Arizona Self-Storage Association’s legislative accomplishments have proven the power the organization possesses to work for and elevate conditions for the storage industry in Arizona. 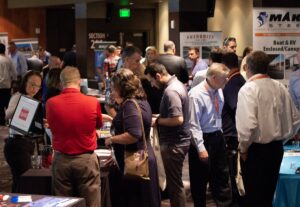 AZSA members at the 2019 conference and trade show.

“Terry had an office at 24th and Camelback. They met in the basement,” Marmor recalled. “It was quarterly meetings for the first couple of years. Bill always came with Oreos and soft drinks.”

After 2 years, the meetings evolved into “let’s get a person to come and educate us,” Marmor said.

“It occurred to me to finally ask whether we should consider incorporating as a trade association, so a committee was created. We created an outline of ideas of what a trade association could do, such as industry image improvement, networking, legislation, resource development, operator education and standards of conduct (12 major topics in all),” Marmor said.

What was then called the Greater Arizona Mini Storage Association (GAMSA) was created. In 2006, the name was changed to the current Arizona Self-Storage Association (AZSA).  The original spark was to do more and have more power as a group. A big issue at the time was real estate taxes.

“Our vision hasn’t changed much over the years,” said Chris Rudel, former AZSA president and current board member. “As an organization we have adapted to all the technology and information changes – for the better. While our industry has changed, AZSA has always helped smaller facilities stay informed and remain profitable. From very early on we have always worked together.”

AZSA held its first trade show in 2000. It has since combined the trade show with its annual conference and golf tournament. This year, September 22-23, the conference will feature a hybrid exhibit model with traditional trade show exhibit space in a separate room and networking stations in the Showroom at Wild Horse Pass Hotel & Casino, 5040 Wild Horse Pass Blvd., in Chandler for exhibitors. AZSA also offers educational webinars for its members.

“Richard (Marmor) best explained how the association started – with a regulatory/ legislative need. That was a driver for membership,” said Anne Mari DeCoster, COO of Storelocal Storage Co-op and Executive Vice President of Tenant Inc. She also served as AZSA Executive Director for 10 years and sits on the board. “When I served as AZSA’s Executive Director, I quickly realized that was AZSA’s super power – being able to defend the industry in the legislative and regulatory arena.”

Entrepreneurs introduced the industry in the 1960s, building small mini-warehouses as a real estate tactic to warehouse land for higher-and-better-uses, waiting for urban growth to reach them. This inauspicious beginning grew into a mature industry, constituting one of the highest profit real estate sectors with the lowest foreclosure rate.

“But In 1996 when we began AZSA,” Marmor said, “self-storage was still something of an odd, unknown industry.”

Self-storage became the highest and best use. Traditionally owned by small family businesses who were the only ones paying attention to this lucrative sector, the dynamics changed with the Great Recession of 2008. Its lingering, devastating effect on most real estate sectors shone a bright light on the self-storage space, and in effect, strengthened its standing as one of the best asset classes.

Since 2008, REIT ownership of self-storage properties has more than doubled to over 18%, particularly in the top 100 Metropolitan Statistical Areas (MSAs).

Today’s self-storage business looks very different than it did in the 1960s when the industry began. “Glam storage” buildings built in recent years look like best-in-class office buildings – far from the dingy “mini-warehouses” of the past.

“In the early 2000s people started accepting AZSA as a group doing the right thing,” said Martin Lorch, president and co-founder of BPI Capital Management and an AZSA board member. “Passing the insurance bill was key.”