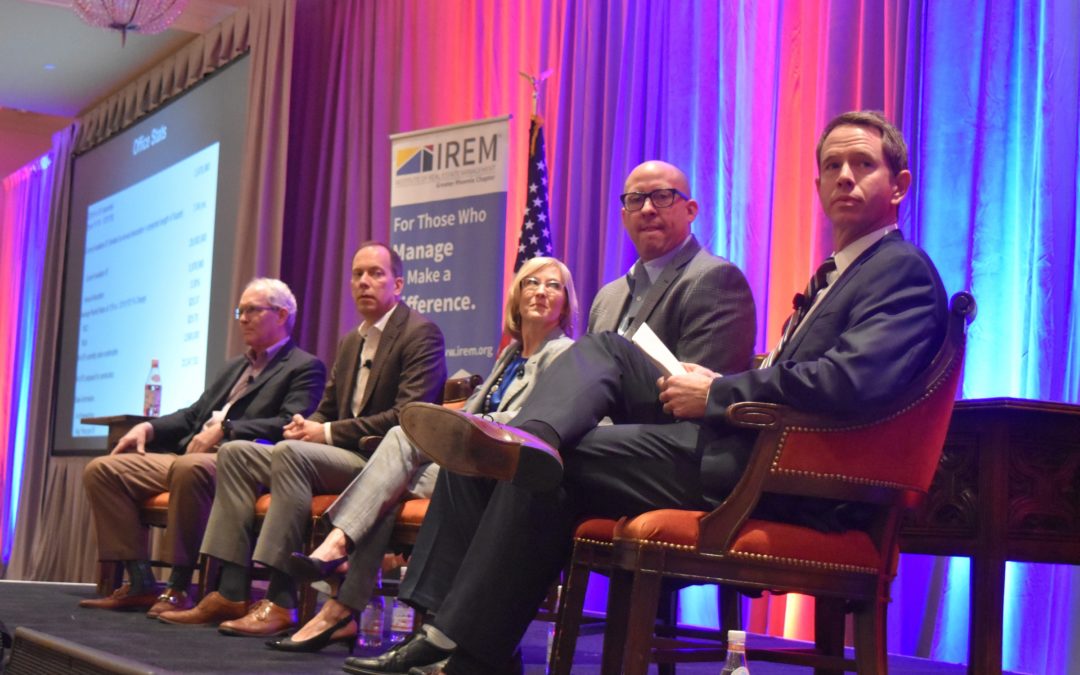 PHOENIX, ARIZONA (January 22, 2020) – The theme of the 13th Annual IREM-CCIM Economic Forecast was “The Real Scoop.” Judging by the comments of economists and industry panelists, the message that resonated was “Phoenix and Arizona are on fire.”

“Last year we talked about being late in the game and would there be extra innings,” said keynote speaker Elliott D. Pollack. “Where do we stand in the cycle now? Well, Phoenix is the most affordable major market in the Western U.S. We’re growing at three times that of other U.S. cities and still need to figure out how to deliver affordable housing. We’re likely to remain one of the top five metro areas in the country. Overall, I’d say the picture is positive.”

The Valley’s premier real estate outlook recently drew a crowd of more than 400 at the Omni Scottsdale Montelucia. Besides Pollack, the Economic Forecast featured panelists who specialize in office, industrial, multifamily and retail properties. The takeaways from each panel:

>> Office: The center of all activity continues to be Tempe, around Arizona State University and the Grand at Papago Park Center. Overall vacancy in that submarket is in the single digits. SkySong has added three more buildings, a hotel and an 800-unit multifamily project.

“We certainly have created an urban environment, a true live-work-play lifestyle,” said panelist Stan Shafer with Holualoa Companies, one of the developers of SkySong.

“We don’t have enough doctors and facilities,” she said. “We certainly have more room for facilities. Right now, we have two hospitals under construction and more expanding. You don’t see that on the East Coast any longer.”

“Our (the Valley) roster is now the Oracles of the world, financial companies. The diversity of the market has put us on sound footing here.”

>> Multifamily: While Arizona is enjoying a booming multifamily cycle, there are still issues on the horizon that could affect an industry that pumps $3.8 billion annually into the local economy.

“Last year is the first year we actually built enough units to meet the demand,” said John Carlson with Mark-Taylor. “The core of what creates demand is jobs. It’s all about jobs. But what keeps me up at night is rent control. It’s now an issue in 41 states.”

A lack of affordable housing is also a concern. More than 70 percent of all units built in the past few years have been specifically in Phoenix, Scottsdale and Tempe.

“The cycle is dynamic, and we have a lot of runway left,” said John Rials with Western Wealth Capital.

>> Retail: The new moniker for this property type, according to the panelists, is consumer real estate. A property type in which consumers want and expect an experience, whether it’s shopping or eating in a restaurant.

“Retail real estate is the best of all property types,” said Kalen Rickard with Western Retail Advisors. “We’ve had to reinvent ourselves. But think how we affect other property types, including multifamily and office. It’s still true that retail follows rooftops, especially in the Valley.”

Trends? Josh Simon with SimonCRE said a popular trend is the unanchored retail center. “Retail is getting more localized,” he said.

>> Industrial: As new transportation corridors open around the Valley – namely the loops 202 and 303 freeways – the industrial market has flourished, panelists agreed.

“The Southwest Valley is experiencing an increase of larger big-box users because the land is cheaper out there,” said Jeff Foster with Prologis. “It’s e-commerce, food and beverage that is serving and fulfilling the population growth out there. The Loop 202 (South Mountain Freeway) is going to be a huge game-changer.”

“The pent-up demand is now playing out,” Larsen said. “In-migration. Affordable housing. Pharma, aerospace and defense … industrial is being backfilled with lots of employment.”

“The labor story is really what is driving activity in the Southeast Valley,” he said. “There are six or seven applicants for each job posting. Human resources is on the first tour. They want to know where the labor is coming from, where the kids will be going to school, where employees with be shopping.”

E-commerce, Megan Creecy-Herman said, is one of the darlings of the industrial sector. Data centers are the other.

The recipient of this year’s Impact Award, Grand Canyon University President Brian Mueller, echoed the remarks made by Gov. Doug Ducey at his recent State of the State Address.

“This is one the best places to live and work,” Mueller said. “One of the biggest decisions the school made was to stay in West Phoenix. It’s a wonderful neighborhood of immigrants. What it needed was an economic catalyst. A lot is now going on west of Central Avenue. I feel extremely blessed to be at Grand Canyon and contribute to our local economy.”

“Grand Canyon University is one of the greatest business and education stories in the country today. Brian could teach people a lot about real estate. He is very bullish on our economy. This is a very exciting time for all of you to be in this industry. Phoenix is on fire.” 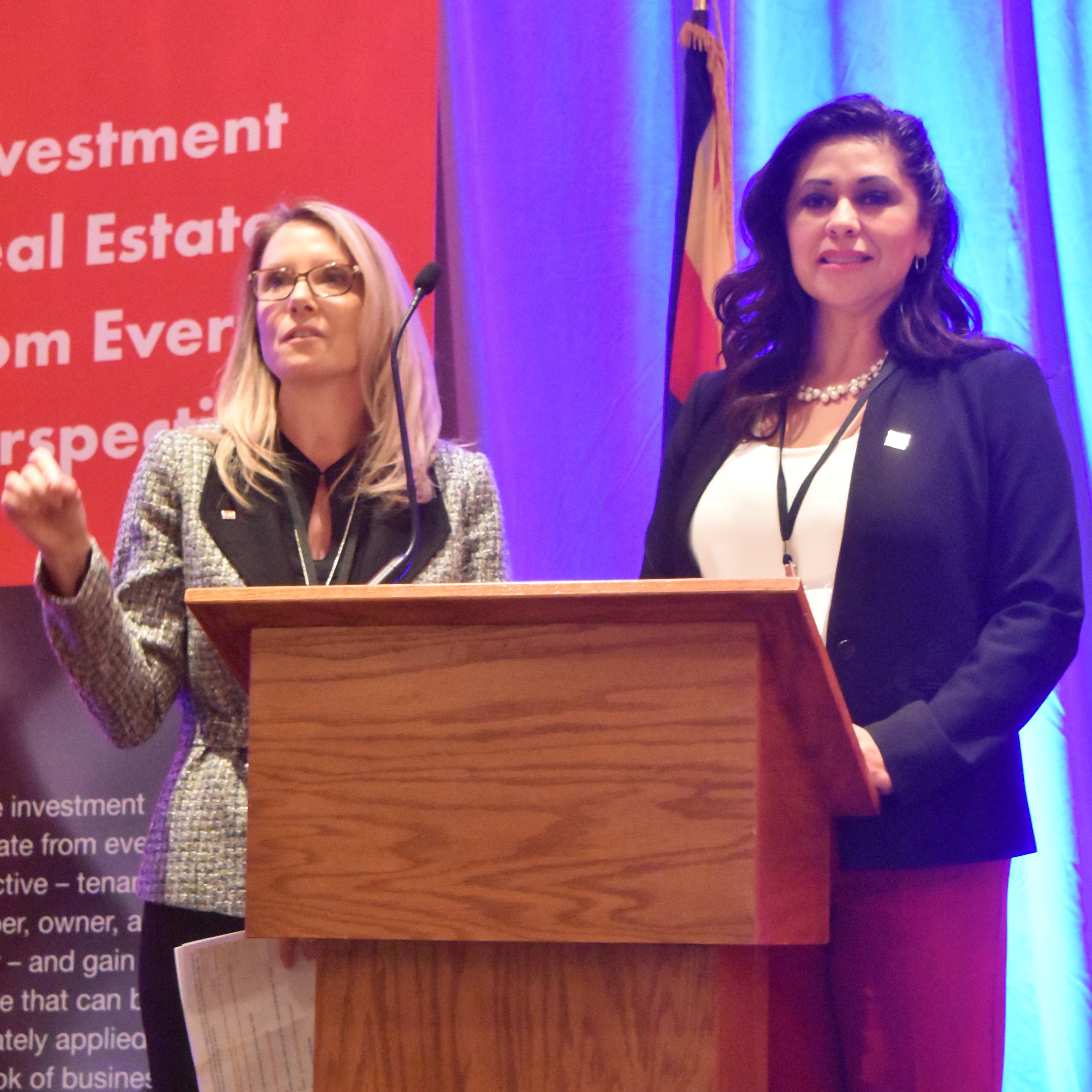