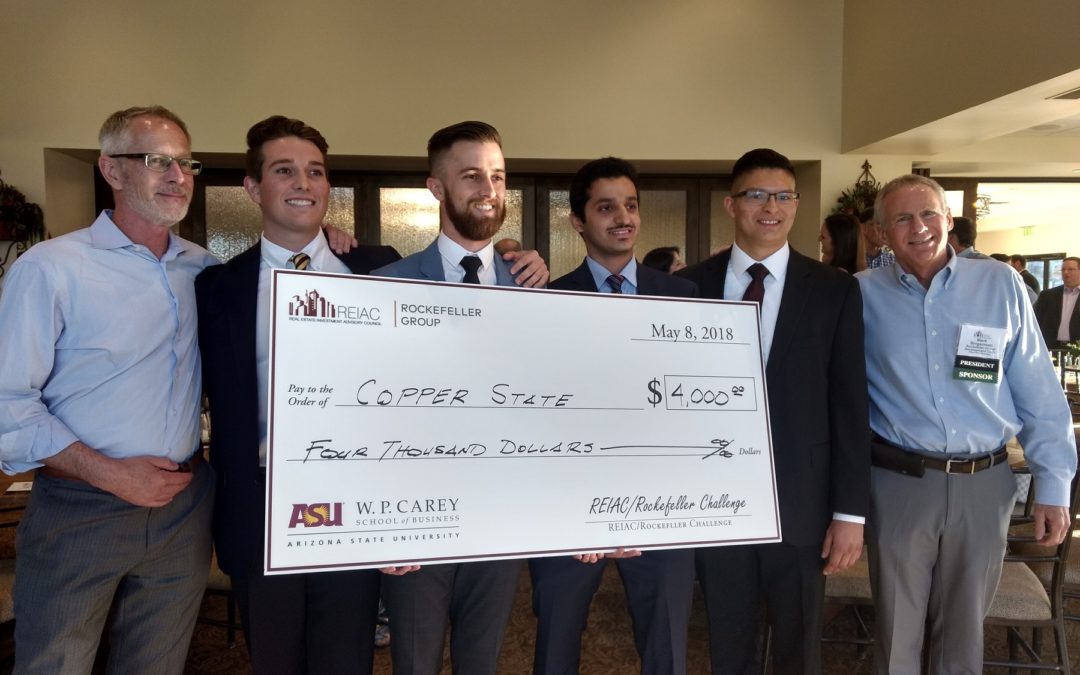 PHOENIX, Ariz. (May 10, 2018) – It was one of the closest finishes in its history as three teams competed in the 5th Annual REIAC/Rockefeller Group Challenge held May 8 at Arizona Country Club.

This year’s project was the 148-acre Arizona State University Thunderbird School of Global Management campus in Glendale. ASU is moving the school to its downtown Phoenix campus.

“The biggest challenge was taking into account what the city really wanted compared to what the market was asking for,” Leonard said. “Going through the general plan and to be able to come up with uses for our product was a great experience.”

Copperstate’s four goals for the project are balanced housing types, conservation, rehabilitation, and redevelopment. Historical elements on the campus include Founders Hall, Hangar 1, and the old air traffic control tower.

“The greatest satisfaction was getting through the three-synthesis process and finally coming to a conclusion. You know what you’re looking for in the build-out process, marketing, and the pro formas. You really get to see how the development process works. We had a great team. Everyone contributed equally,” Leonard said.

Mark Stapp, director of the MRED program, said the challenge has made great strides in just 5 years.

“Two things get better every year,” Stapp said. “One is the support that comes from the REIAC membership and the Rockefeller Group because that’s how this becomes real in terms of the student experience and not just in theory. The student experience continues to improve as we develop an alumni base. As the program develops a reputation, we get better students every year.”

In addition to sponsoring the annual Challenge, REIAC Southwest awards two $2,500 scholarships to MRED students that have a financial need and want to pursue real estate careers in Arizona after they graduate.