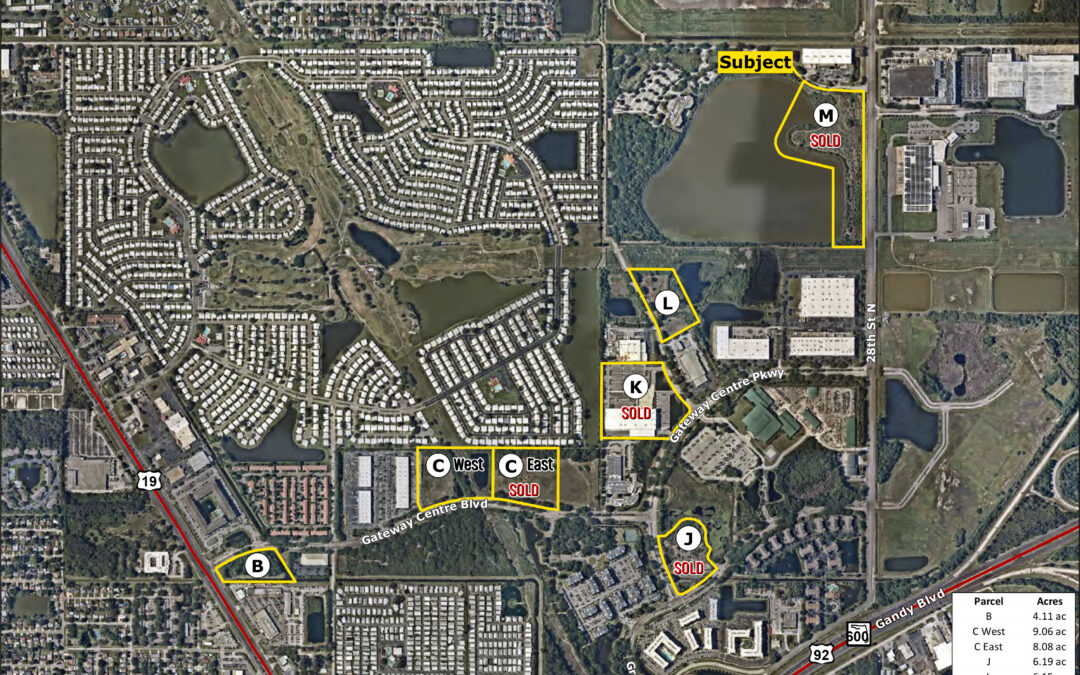 Tampa, Florida (Sept. 22, 2022) – Land Advisors Organization’s Tampa Bay office announces the recent sale of an 18.6-acre parcel in the Gateway Centre Business Park in Pinellas Park. The parcel, which includes a retention pond, was sold for $3.58M to 28th Street North Industrial Properties, LLC, an entity owned by South-Carolina-based Johnson Development Associates and will be developed into a 110,700 square-foot industrial building.

Nancy Surak, a senior land advisor and managing broker for Land Advisors Organization’s Tampa Bay’s office, arranged the sale on behalf of the landowner Huntley Properties and Landholdings, LLC. The buyer was represented by David Freeman of Harrison Bennett Properties. The new facility, which is being built at the corner of 28th Street and MCI Drive, is expected to complete in 2023, and will create approximately 200 new jobs.

“The Pinellas Park area has become hub for many of the state’s largest employers in recent years and as the area’s population continues to grow we anticipate employers will continue to expand or locate within the region,” said Surak. “Since listing Gateway Centre Business Park’s seven vacant parcels in early 2020, just before the Covid pandemic began, interest has been growing from a variety of industries. In fact, we estimate that by 2025 the park will create more than 570 jobs with an annual payroll of over $25 million being generated from the four parcels that have already sold.”

This most recent sale in the nearly 65-acre Gateway Centre Business Park marks the fourth site within the park to be facilitated by Land Advisors Organization since December 2020. Parcels have also been purchased by Tavistock Development, which is built a 100k square-foot distribution facility that is slated to open later this year, bringing approximately 200 jobs; Everest Hospital, which is constructing a 100k square-foot physical rehabilitation hospital that is expected to open in 2023 and will bring approximately 100 medical jobs; and Polypack, which plans to expand its facilities with a 100k square-foot manufacturing development and special use facility that is slated to open in 2024, bringing an additional 70 new jobs to the area. There are three remaining parcels within the park available.

Nancy Surak specializes in providing land advisory services and land sales throughout the Metropolitan Tampa area for Land Advisors Organization. She recently celebrated a career milestone of closing on more than $275M in land sale transactions.