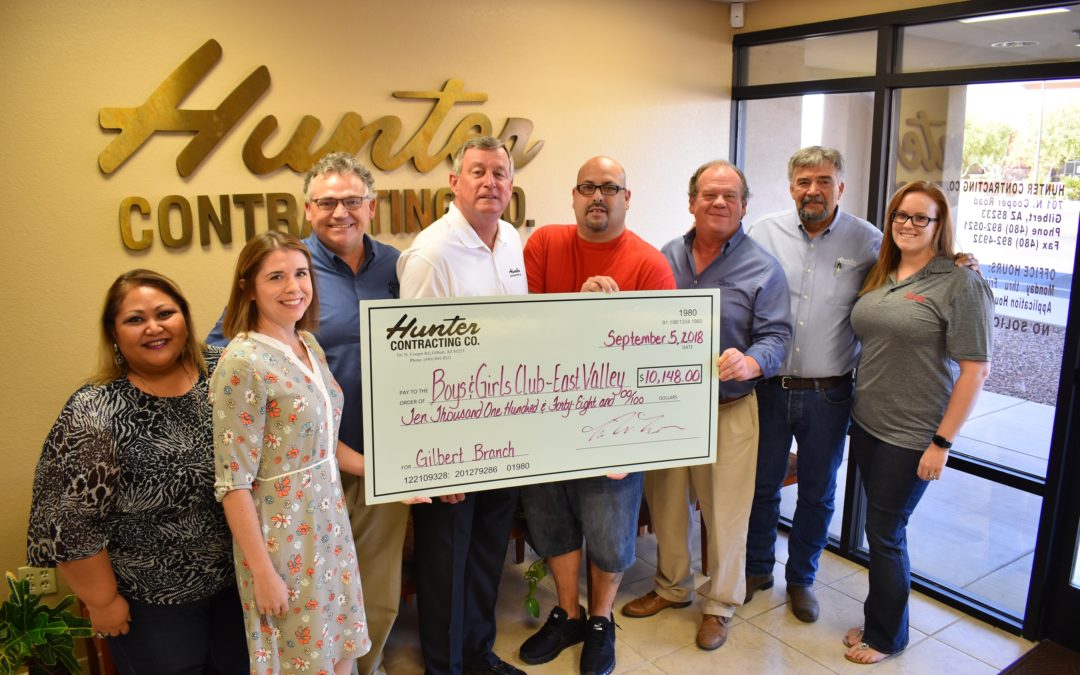 GILBERT, ARIZONA (Sept. 6, 2018) – For almost 30 years, Hunter Contracting Co. and its business partners have given nearly $600,000 to community organizations through its charity golf tournament.

This year’s 28th annual event to benefit the Boys & Girls Clubs of the East Valley and the Children’s Organ Transplant Association (COTA) raised more than $20,000. The tournament drew 131 golfers to the Arizona Grand Resort.

“Philanthropy comes from the heart. We are honored to support these two incredible organizations,” said Hunter Contracting Co. Chairman of the Board Max Taddei. “The Boys & Girls Clubs make a difference in bringing out a child’s potential and helping them achieve their goals.”

COTA was the choice of his mother, the late Dr. Miriam Taddei, one of the founders of Hunter Contracting Co.

“She looked tirelessly for an organization that effectively helped families with urgent medical needs. She found that in COTA,” Taddei said.

Boys & Girls Clubs of the East Valley has been around since 1963. They provide valuable after-school programs to both girls and boys. More than 35,000 children and teens are served at 11 branches.

COTA was founded in 1986 after a group of volunteers in Indiana helped raise funds to place a child on the liver transplant waiting list. Since then it has helped thousands of children and young adults and has raised more than $100 million for transplant-related expenses. COTA does not charge a transplant family, or patient, for its services.

Ben Sornsin, a “COTA Kid” since 1992, is the son of Thomas Sornsin, who is a former employee of Hunter Contracting Co. When Ben required a life-saving liver transplant, his only chance for survival was an operation at UCLA Medical Center. COTA answered their prayer.

“We were so scared we were going to lose our little boy while at the same time being repeatedly asked how we were going to pay the bill,” Thomas Sornsin said. “We are extremely thankful our family has been part of the COTA family for 26 years.”