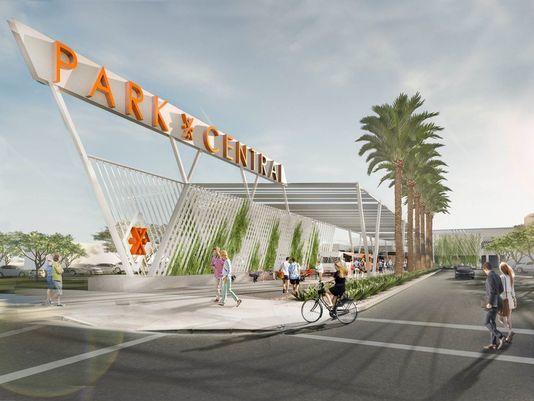 A rendering of the revitalized Park Central in Phoenix, which is getting a Zipps Sports Grill.

“The opportunity at Park Central represented a once-in-a-lifetime opportunity for Zipps to enter the downtown market,” Gerow said. “With a new student population from Creighton University and new residents filling the proposed apartments, it will serve as their local place to grab a bite to eat, watch a game or two and enjoy a beverage. It will be an ideal eatery to serve a new client base in Midtown Phoenix.”

One of the Valley’s original shopping destinations, Park Central Mall opened in 1957 and became the center of activity along Central Avenue. It has undergone a substantial facelift with nearly $60 million invested. All its original buildings still stand, and most have only cosmetic changes.

They are being repurposed into modern office and retail space. The mid-century-modern style of the past is evident in buildings that were constructed with some extraordinary architectural touches. All of these features will be at the center of the revitalized property.

Plans also call for a 278-unit apartment complex that had been a parking lot. The owners of Park Central are also working with a potential developer to build a 200-room hotel on the premises. The phase will also include redevelopment of a 193,000 SF former department store into office and retail space.

To replace the parking lot, a community facilities district has been established to build a parking garage, which is scheduled to be completed in the third quarter of 2020.