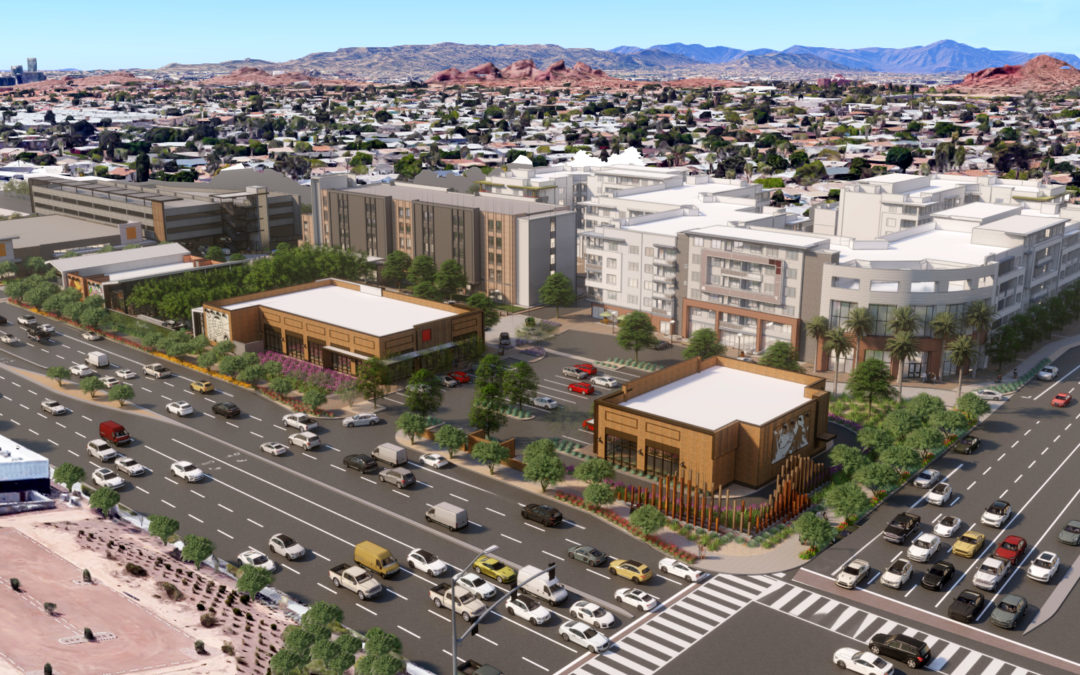 SCOTTSDALE, ARIZONA (Dec. 5, 2010) – Sigma Contracting, Inc. today broke ground at iconic Papago Plaza in Scottsdale for up to 88,000 SF in new retail and office buildings and a 120,000 SF parking garage.

Sigma’s portion of the project is valued at $11 million to $16 million and will consist of the complete demolition of the original Papago Plaza, 1408 N. Scottsdale Road, that was constructed in the mid-1960s and renovated in the early 1980s.

The new project is being broken into three main phases: retail buildings plus a possible three-story office on one of the retail buildings and parking structure (Pivot Development and Sigma), hotel (PEG Development) and multifamily (Alliance Residential).

“Sigma is honored and very excited to be working on this project with Lee Mashburn and Pivot Development,” said Sigma President Dan Hinkson. “We have worked together on various projects for almost 20 years. We started on this project shortly after Lee purchased this property almost seven years ago and helped bring a variety of concepts to the table over time along with potential tenants.

“We worked through numerous budgets based on various concepts for this project and are excited he has ultimately elected to negotiate the final project with us. Now the real fun starts,” Hinkson said.

The new Papago Plaza will feature an adaptive re-use design of natural elements including brick, stone and wood with a mid-century modern aesthetic. The retail development will include art murals, neighborhood gathering areas for events, a common heavily-landscaped park area with full-service Wi-Fi, fountains, benches and child-friendly water feature.

Papago Plaza was originally built in the 1960s by the Malouf family and subsequently renovated to the “pueblo” look in the early 1980s. Mashburn purchased the property from the Malouf’s six years ago and began the concept of redeveloping the property.

Original concepts looked at renovations then partial demolition with new construction followed with the current concept of a complete demolition and reconfiguring with multiple uses. The City of Scottsdale originally wanted to see high-density office buildings on the site, but there did not seem to be a market demand for this specific use on the entire site.

“Lee reached out to several potential partners and ultimately decided on Alliance for the multifamily and PEG for the hotel,” Hinkson said. “Pivot retained the retail component.”

There were numerous meetings with adjacent neighbors to gather feedback and hear their concerns relative to new construction and development. Based on the feedback and involvement, the current concept was created and is being permitted with the City of Scottsdale.

“Teamwork is vital with a project like Papago Plaza,” Mashburn said. “The whole thing is built around teamwork. We can’t do it alone. Our theory is to develop the best and most talented team including the architect, the engineer and the general contractor. We have done five or six projects with Sigma; we know what they can do.

“We are extremely proud of this project. We look at it as the gateway to South Scottsdale. With SkySong across the street, we want to create synergy at this intersection (Scottsdale and McDowell roads),” Mashburn said.

The architect of record is Nelsen Partners of Scottsdale. Notable subcontractors include Atwell Demolition (building and site demolition) and Coreslab (precast for the parking garage). Judi Butterworth, senior vice president of Orion Investment Real Estate, is handling the retail leasing for Papago Plaza.

Sigma Contracting, Inc. is an Arizona-based company founded in 1983 and licensed in eight Southwestern states. As a premier commercial general contractor, Sigma has established a broad footprint in the region with an extensive portfolio of projects in a variety of sizes, industries, and property types, with established long-standing client relationships with top developers, architects, municipalities, and businesses in the region. For 35 years Sigma has been the turnkey contractor for more than 900 construction projects including hospitals, medical office buildings, schools, public venues, retail and industrial spaces, banks, office buildings, and municipal facilities.