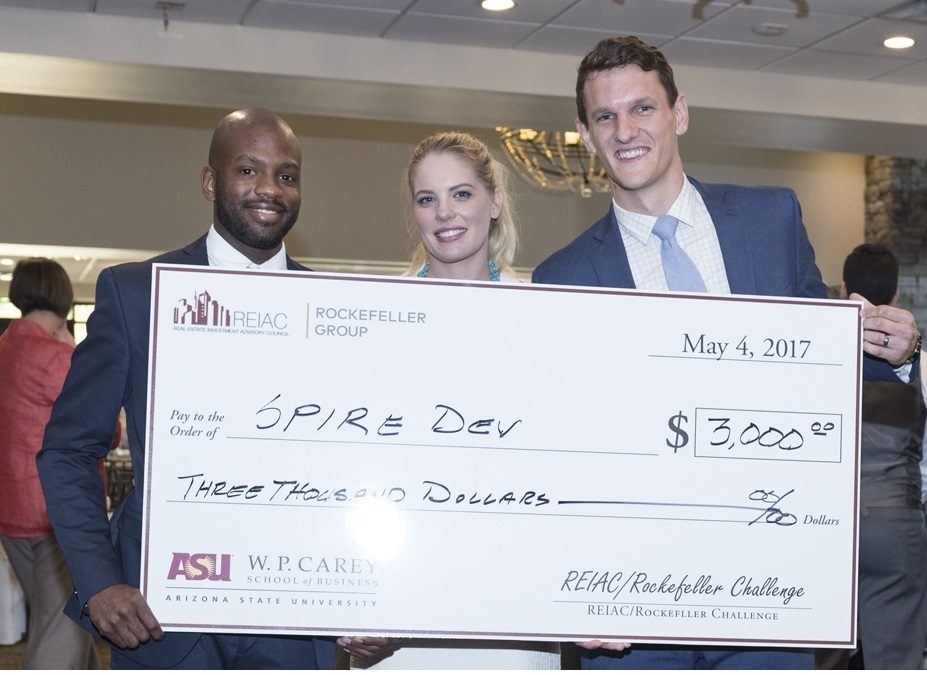 PHOENIX, Ariz. (May 8, 2017) – The stakes were high – and the projects were well presented – as four teams competed in the 4th Annual MRED-REIAC/Rockefeller Group Challenge held recently at a Valley country club.

This year’s project consisted of a mixed-use development at Dorsey Lane and Apache Boulevard in Tempe. It featured six separate parcels including a new school for the arts; a retail center at the NWC of Dorsey and Apache; retail/office space at the NEC corner of Dorsey and Apache; and three parcels of vacant City of Tempe land.

Spire Development’s winning project, Third Space, was a four-phased master plan that included multifamily space of 70 apartments, 50 flats, 43 lofts, 16 studios, and 13 townhomes; a new school for the arts; a restaurant; a gym; and retail, office, and community space.

“Spire was exceptionally proud of the win,” Sepic said. “Our approach, after discussion with our financial mentor, Joe Blackbourn of Everest Holdings, was to go the realistic approach: what is most feasible? The best take away from Joe’s mentorship over the past two months is that real estate is not just about thinking of grand designs; it is understanding that a piece of property will ‘tell’ you what it should be.”

Sepic said the biggest challenge the team faced was making the financials work.

“We were flabbergasted,” she said. “The research showed a significantly depressed immediate demographic, high vacancy, as well as issues of crime and transients in the immediate area. Originally, we went with the bare minimum – what was feasible on the site with existing conditions. We met with various individuals including Mike and Casey Treadwell, Josh Simon, Pete TeKamp, Eric Brown, Ben Hall, Shelby Tworek, as well as our instructors from the MRED program. All gave us their expertise and pushed us to be as realistic as possible. Our biggest support was Joe (Blackbourn).”

The greatest satisfaction of participating in the MRED-REIAC/Rockefeller Group Challenge?

“Having various real estate experts through all the various industries who believed in the proposal and found our financial metrics and overall concept as viable,” Sepic said. “We came a long way as a team and even more so through our own new learned skills as a result of this competition.”

“We really appreciate those in the industry, the mentors, and all the people who support the challenge,” said Mark Stapp, director of the MRED program. “This activity is as close as we can get to the actual business of making the pitch and getting the money.”

In addition to sponsoring the annual Challenge, REIAC awards two $2,500 scholarships to MRED students that have a financial need and want to pursue real estate careers in Arizona after they graduate.