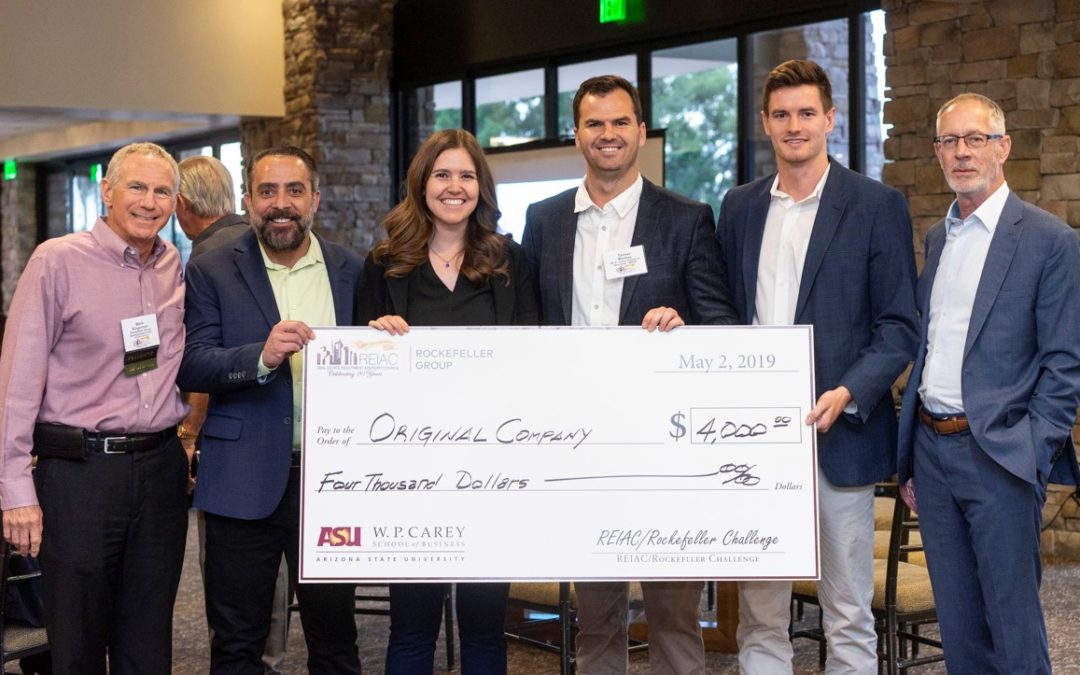 PHOENIX, ARIZONA (May 7, 2019) – The Novus Innovation District in Tempe was the focus of the three teams competing in the 2019 REIAC/Rockefeller Challenge. Capturing top honors at the 6th annual event was the Original Company for its project, Karsten.

Three of seven teams in this years’ MRED program advanced to the May 2 Challenge held at the Arizona Country Club. Teams were given the project on February 25.

“This is as close as you get to being in the business,” said Mark Stapp, director of the MRED program. “Pick a project, make a pitch, make money.”

This year’s development project included 48 acres on the back nine of the Karsten Golf Course at the NWC of Rio Salado Parkway and McClintock Drive. It was on a 99-year ground lease with ASU. This was the MRED students’ 3rd Synthesis project for their final grade.

>> Original Company – Karsten: The goal was to develop an urban neighborhood in which residents are interconnected with the environment and surrounding communities. Karsten is a name that is familiar to the area. To honor the generous support of Karsten and Louise Solheim and the Sun Angel Foundation, the development would keep the name Karsten.

A key aspect of the project was the emphasis on multifamily to serve the thousands of jobs located along the Rio Salado Parkway corridor. It would include low-rise to mid-rise buildings and include workforce housing, which is in great need in Tempe.

“More family-oriented multifamily,” said Campbell, who added that the project would take advantage of Tempe Town Lake for the hospitality component of the project.

The Vector would attract startup techs such as Carvana and Offerpad. Landing those tenants would continue the momentum of the PropTech market. It would include office, residential, retail and hospitality.

The development included two buildings: HQ, co-working/creative office and co-living with the ASU School of Design located on the first floor; and The Hub, at the heart of the Vector. It would feature creative office and mixed-use conference space.

The 5-year target hold period included a ground lease payment of $60 million, a levered IRR of 27.85 percent and levered multiple of 2.02x. The Vector would take advantage of being in an opportunity zone.

>> Hydra Development – The Nexus: The goal of this project was to be the birthplace of the next big thing in the heart of Tempe. It would nurture and foster the next generation of business through community-focused programming and support.

It would provide access to a young, highly-educated workforce. Also located in an opportunity zone, it would have access to capital equity over a 10-year hold time.

The Nexus would include office, retail, multifamily and hospitality. Phase 1 was the Boardwalk; Phase 2 was The Towers, a 230-key luxury hotel and The Retreat, a multifamily project of 481 units. Phase 3 was Nexus Avenue and The Nouveau (572 units); Phase 4 was the Karsten Business Park.

The Nexus program called for innovation space that included 5,000 SF of incubator restaurant space. The Nexus would also have a community association. It would offer physical, social and cultural placemaking geared toward supporting the stakeholders and occupants.

The LTV would be 65 percent for nine parcels and a $96.9 million ground lease payment. It would have an IRR of 28 percent.

The Real Estate Investment Advisory Council (REIAC) was established as a nonprofit trade association to provide a forum for the exchange of ideas, concerns and experiences among senior executives who conduct commercial real estate transactions. The invitation-only group limits its membership to senior-level executives at companies, who act as principals, and whose function is to develop, acquire, manage and/or finance commercial real estate. Institutional quality programs and peer-to-peer relationship-building opportunities have established REAIC’s reputation throughout the national real estate investment community as one of its premier associations. www.reiac.org